We all grew up listening to fairy tales as bedtime stories or special treat, or even as a mean to keep an active child quiet for a moment. But many grownups are also fascinated by celebrity gossip and princess stories.

If you browse through Yahoo or Google, you will find a daily article about the British royals–the latest dress or hat worn by Duchess Kate, an adorable pictures of little Prince George and his sister, or even the amorous escapades of Prince Harry.

Remember the incredible success of The Princess Diaries by Meg Cabot?

The inspiration for A BRIDE FOR PRINCE PAUL
While cruising the British Isles, I visited Guernsey, in the English Channel. This quaint island with special privileges and autonomy became Rensy Island, the setting of my new story. Prince Paul’s romance was inspired by Prince William and Kate’s, but my heroine is a dedicated American doctor. 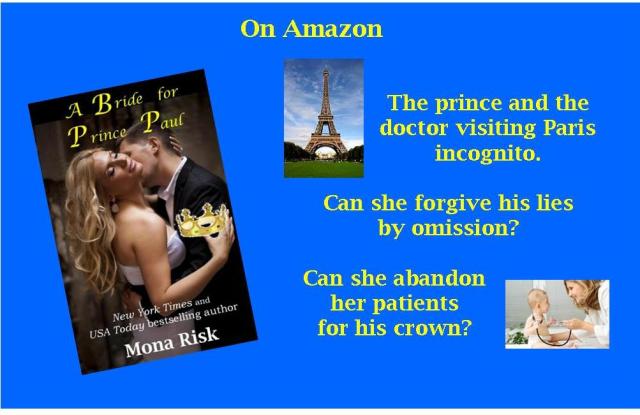 The reigning Prince of Rensy Island is very sick. To secure the future of his country he decides to match his grandson Paul with the American descendant of a Rensian princess.

Prince Paul is a successful businessman who leads a jet set life and often feeds the tabloids with juicy gossip. And he’s the last person who would let anyone manipulate him into an arranged marriage. Yet to please his dying grandfather, Paul agrees to meet the young woman in Paris and drives her around without revealing his title or goal.

Dr. Amy Tyrone has been planning a vacation to celebrate her appointment as a fellow in pediatrics at Harvard. When her boyfriend refuses to accompany her because of a medical conference cruise, she reassesses their lukewarm relationship and travels to Paris without him.

Attraction sizzles between Paul and Amy and soon turns into an irresistible passion. But Amy is a dedicated pediatrician who puts her patients and career above all else. When the ruling prince’s health fails, Paul and Amy are summoned to Rensy Island. To Amy’s shock, their engagement is announced.

Will Paul be able to convince Amy that he sincerely loves her?

How can she abandon her patients for his crown?