Christopher Columbus had crossed the Atlantic on a rudimentary sail boat and discovered America, right?

I figured it would be fun to follow in his footsteps–so to speak– and discovered unchartered territories like Iceland and Greenland. Although my idea of crossing the Atlantic involved a comfortable Princess Cruise ship, a summer trip, and several stops in new places.

We started our voyage from Southampton, England, sailed the North Sea, and docked in Bergen, Norway, two days later. Too many clouds darkened the sky, and it was much cooler than I expected for the beginning of September.

Unfortunately, I caught a cold that turned into bronchitis. As usual I carried a stock of preventive medicines. I was able to treat myself and not miss the fun. 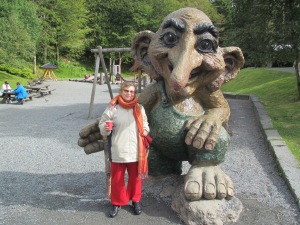 Akureyri is the capital of North Iceland, only a short distance from the Arctic Circle, and showed snow-capped mountains in summer.

One of the must-sees of the north is the area around Lake Myvatn known for its bizarre rock formation, of lava origin due to still active volcanoes. 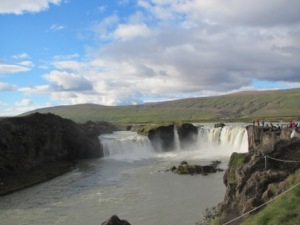 The famous Godafoss is one of Iceland’s most accessible waterfalls. The name means Falls of the Gods. In 1000 A.D. Iceland followed the Norse religion. The chieftain Porgeir meditated for 24 hours on what he had learned from missionaries, then decided that Iceland should become a Christian nation. On his way home, he decided to underscore his decision by throwing his carvings of the old gods into the waterfall, hence the name of Godafoss.

Akureyri is an interesting city with all the comforts of home, Internet everywhere, even in public buses. 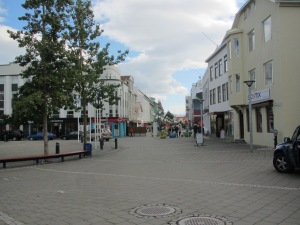 Tourism is the major industry.

One third of the world’s volcanoes are in Iceland, but fortunately most of them are of the friendly sort.

We left Akureyri under a stormy sky. 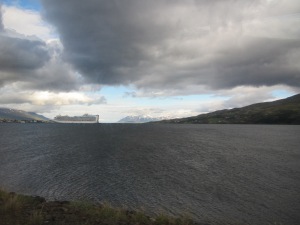 If you like to travel and love to read, come and enjoy my international romances. Around the world through stories that simmer with emotion and sizzle with passion.

1 Response to Cold in Iceland