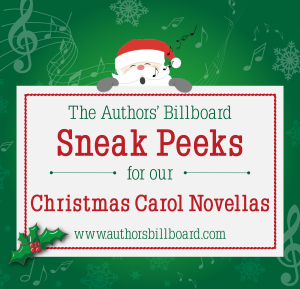 Zach took a hefty swallow of Makers Mark draining his glass. Plunking the empty schooner on the table top he reached for the bottle and poured himself a healthy portion. Not waiting for his buddies’ certain approval, he refilled Danny’s and Mark’s glasses with the amber liquid and raised his tumbler in a mock salute.
“Here’s to what, men, our fourth, or, is it our fifth Christmas, celebrating at the Xpose? Damn, I never thought anything could be worse than canned Christmas music everywhere from Walmart to the barber shop.” He shook his head and pointed with his chin at the stage. “But two nearly naked faux reindeer pretending to have sex to the beat of Rudolph the Red Nosed Reindeer? Damn, that’s over the top even for the Xpose!”

When his buddies roared in agreement, Zach tried to remember when he’d been amused, hell, even a little intrigued at the Xpose’s Christmas decorations. Leave it to Lecherous Lenny, as he and his men had named the proprietor of the sleazy strip joint, to create the scene in front of them. Who else would decorate his fake Christmas trees with gargantuan silver and gold phalluses? Not to mention every kind of sex toy the most perverted imbiber of kink could imagine. Zach admitted that once he’d even been amused by the plastic breasts decorating the trees. In an apparent imitation of Rudolph’s nose, they were topped with pointed red nipples that blinked on and off.

Zach took another slug of the potent whiskey welcoming the harsh burn in his throat. With a heartfelt sigh he acknowledged that the garish sex-saturated displays were no longer funny, they were sad. Watching the women gyrating on the stage he shook his head. He knew that their glassy eyes and occasional stumbles confirmed that they’d deadened their bleak lives with the plentiful crystal Lenny provided to keep his girls in line. Disheartening as the women were, the ugly hoots of the drunken men egging them on, was sickening. Zach was about to finish his drink and call it a night when the girl-on-girl reindeer tableau came to a merciful end.

As he rose to his feet and was about to slap down a bill, another song hit the PA system. Instead of a cheerful, inappropriate children’s tune, it was Eartha Kitt’s taunting tribute to materialism, Santa Baby. But it wasn’t the saucy lyrics that made Zach change his mind about leaving. Rather it was the long-limbed dancer sauntering across the stage toward the brass pole in the center of the stage. Deciding that leaving was premature, Zach allowed himself to sink back in his chair and appreciate what was an anomaly at the Xpose: A stripper who knew how to dance. Zach marveled that the woman not only moved her beautiful body in the expected, provocative fashion but she did it with a sinuous grace that snagged his breath.

Danny’s appreciative whistle and muttered expletive confirmed that Zach wasn’t the only one agog at the apparition before them.

“Wow! I haven’t seen that little piece before. Don’t tell me Lenny the Lecher is adding quality to his lineup. Fuckin’ A, that babe looks more like a beauty pageant contestant than a stripper.” He added with a hearty laugh as the music throbbed, “Bet she’d win the talent portion if not the whole damn crown.”

Gratified that his cohort was as flummoxed as he was, Zach tried to figure out what was different about the dark haired woman working her way to the pole. Like all the other strippers, she was wearing Lenny’s sexy de rigour Christmas attire. A tight red low-cut halter captured her full breasts and skimpy boy shorts cupped her curvy ass. The red velvet stocking cap with the sassy white fuzzy ball on the end perched on the shiny curtain of curly black hair streaming over her slim shoulders and back. But unlike the other women, who looked sleazy not sexy, the new dancer almost looked proper. More like one of Santa’s prettiest elves, not a woman who was about to shed her clothes for the voracious men who were screaming at her to “take it off”.

The girl-next-door morphed enticingly when the dancer responded to the crowd’s lewd demands. With a flick of her fingers she allowed the straining halter to fall to the floor. Bodacious breasts topped with sparkling rhinestone pasties revealed a tantalizing glimpse of rosy nipples that stole Zach’s breath. The gasps from his hardened teammates confirmed he wasn’t the only one stunned by her lush body. He almost didn’t want her to lose the boy shorts, not wanting to share more of the erotic vision with the leering men. He was glad that the City fathers had decreed that no matter how loudly the crowd insisted, the remaining G-string would stay in place.

Zach watched in amazement as the stripper-turned-erotic-gymnast skillfully used the shiny pole to display her stunning athleticism as well as her beautiful body. She shimmied up and down the pole twirling from one gravity defying move to another. When she landed a flying breathtaking leap and stood once more upright on the floor, Zach captured her gaze. The look in her eyes when she met his open appraisal surprised him. It wasn’t only the sudden shyness that flickered across her face. Rather it was the fact that her expression changed dramatically. If he was any judge of women who shed their clothes for a living, and Zach most certainly was, he recognized her startled wide-eyed expression. He’d seen it far too many times in his line of work. It was fear, pure and simple. Seeming to realize that her mask had slipped, the accomplished performer quickly recovered her poise. She turned back to the chanting crowd and showered them with a cheeky grin. Tossing her head she shook her booty eliciting a thunderous roar from the appreciative audience. Then with an impudent wave she turned and literally dashed from the stage.

In the less than four years that she has been writing, Taylor has written more than thirty books. Her seven series track her Special Operatives, Covert Agents, Cops, Firefighters and other iconic heroes and heroines, through the harrowing situations that make up their lives. From human trafficking rings to corrupt politicians, Taylor investigates the underbelly of society and the criminals who flourish there.

Taylor says: “From the residue in my personal blender of mixed races, cultures and world views, my characters emerge. It comforts me to know that while evil slinks in the shadows, the “good guys” of the world sniff it out – and snuff it out.
My characters are arrogant alpha males and the feisty women who bring them to their knees – and vice versa… They fight hard, love hard and don’t mince words. They are dangerous men and women in dangerous times. Love, passion and ridding the world of evil? What’s not to like?”
View Website